In the past few days I’ve spent quite a lot of time on my new shining Raspberry-Pi. It’s an amazing little devil, worth every Euro I spent! Since I’ve planned to deploy a software component of my augmented reality system on this board, I needed to figure out how to remotely debug it in order to troubleshoot any issue I would run into. It took me some time, but thanks to the friends on Raspberry Pi Forum and to this awesome tutorial I finally made it: I can deploy my software to the raspberry-pi from Eclipse CDT and debug from my comfortable Windows 7 machine.

Step 1. The first thing you need to do is to setup a working Cygwin environment on your machine. I setup mine by following the advices from IanLinsdell and CopperPhil on the Raspberry Pi forum. Simply copy Cygwin installer to a folder (es. c:\cygwin) and execute it. Be sure to install the python package, the shell and the make tool. 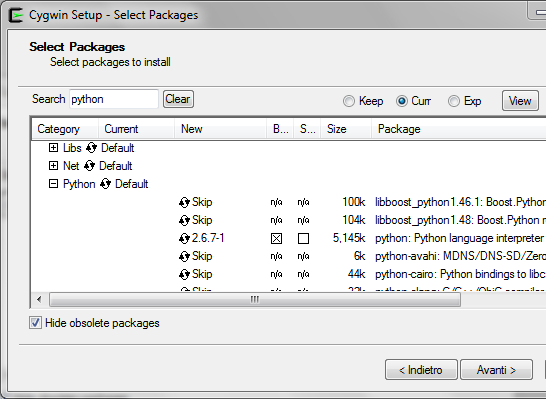 Step 2. The next thing you need to do is to install the required cross-compilation toolchain. That is needed since we are on Windows and we need to compile and debug a software which will run on an ARM machine (our Raspberry Pi). Instead of building your own toolchain, you can download the ones built by a Raspberry Pi Forum user, IanLinsdell, available from his github account here. Since we want to cross-debug, download the hardfp version. Unpack the archive in c:/cygwin/opt/cross/x-tools so that the full path will look like this one c:/cygwin/opt/cross/x-tools/arm-unknown-linux-gnueabi.

Step 3. In order to upload the binaries we will compile to the Raspberry Pi, we need to enable an SSH server on the board. If you installed the Raspbian image, this operation is as easy as running the raspi-config command and selecting the ssh row. Once the server is running, you can use your username and password (default pi/raspberry) to access the Raspberry Pi from your Windows machine, using an SSH terminal.

Step 4. Download and install PUTTY (the full package), which is needed to talk to our Raspberry Pi using an SSH terminal. In order to upload our binaries to the Raspberry Pi and start the debugger, I thought of a little hack: I created a script which run as a post-build step in Eclipse (i.e. gets executed when the compilation successfully produces an artifact/binary) and uploads the file on the board using an SSH connection and executes a few commands after that (chmod and gdbserver). The following is the content of the BAT file, which you can save in a file and path of your choice. In my case I saved it to C:/Users/Dexter/Desktop/RaspberryPi/deploy_debug.bat, but any path will do.

After saving the file, the following settings needs to be tweaked:

Step 5. Download and install Eclipse IDE for C/C++ Developers (CDT). Create a sample “Hello World” project, let’s say its name is “RaspHelloWorld”. Open the project properties by right clicking on the project name inside the Project Explorer. Configure the project as follows. 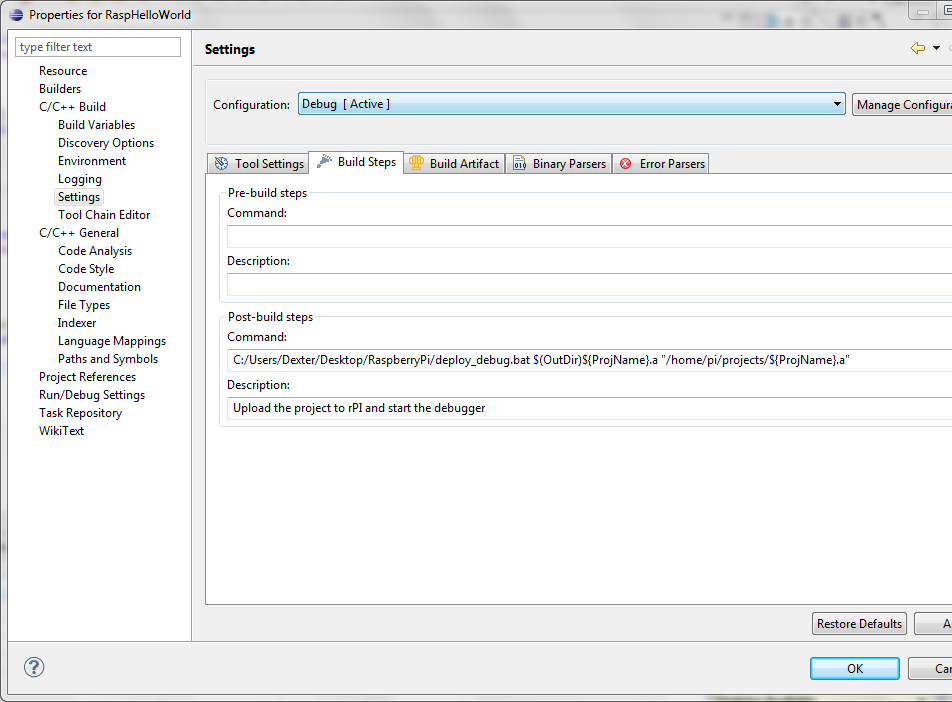 Step 6. Compile your sample project. If everything went smoothly, your Console output in Eclipse should also print something about the binary uploading and command execution. Now it’s time to setup a Debug Configuration. Select Run -> Debug configurations from the top menu. Right click on C/C++ Remote Application and choose New to add a new configuration.

Click on Apply and then Debug. The debugger should start and Eclipse should switch to the Debug Perspective. We made it 😉 If you have any issue and it doesn’t work as expected, feel free to post a comment below!

Update 01/11/2012: As suggested in the comments (thanks Ivo), disabling the “Automate discovery of paths and symbols” option for the C and/or C++ compiler could fix the problem with missing cout or endl. This option can be found in the project properties “c/c++ Build/Discovery Option”. Once disable, click on the “Clear” button to remove all the unwanted include paths introduced into the project.